In recent days, the event “The school meets the district, At the end of the course that started in the first weeks of the current academic year. The project is sponsored by A. Maurizio Blasi, entitled “Biotecnoliogi”, relates to Grade 4 A of the Health Technical Biotechnology course.

The meeting was attended by the Director of Coldiretti for the Province of Taranto and Brindisi Franco del Acqua, the Sava municipal councilor Melina Pesci, representatives of Nastasia sca and G&M Cantore srl, as well as the director of the Instituto Alessandro Pagano.

The class, as part of the PCTO hours to be conducted at local companies, went to two oil companies: G&M Cantore srl Marugio and Nastasia SCA by Fragagnano.

The students tested the reality of the companies’ production and took many samples of the different oils produced, then they were analyzed in the chemistry laboratories of the Institute on Via Roma, in cooperation with Professor Luana Conte.

Pupil Gaia Bernardi and student Lorenzo Di Giacomo explained the experience achieved by their groups in companies and the results of analyzes performed on the acidity of various samples and spectroscopic analysis according to European standards K232 and K270. The acidity values ​​found were completely identical to those of the mills; Spectral analysis showed that all mill samples respect European standards. On the contrary, the extra virgin olive oil bought in the supermarket had a very high value of K232 compared to European standards.

The second semester of the Secondary School of Applied Sciences was added to the event, accompanied by Professor Anna Barnaba, who, as part of the “Made in Italy Connections” project, in collaboration with Luiss University and Confindustria, visited and knew the La Popolare Winery and Oil Factory di Sava, approaching the world of oil production and the first fundamentals of its analysis at the level of the sense of smell and taste, in two meetings with the head of the school, Professor Alessandro Pagano.

Students Alessandra Concetta Antonucci and Federica Malagino provided the outputs related to the experiment that had just ended.

Principal Dell’Acqua highly appreciated the initiative that brings young people closer to the productive realities of our land, as it should take place in all schools. Moreover, he highlighted Coldiretti’s great commitment to trying to overcome the current difficulties related to the case xylila Which can also be suitable for a new, more modern and responsible production season.

Chancellor Bisci highlighted that these school initiatives are a very important part of training, to develop real skills that can help young people become citizens of the future.

And finally, company representatives G&M Cantor srl And Nastasia SCA They expressed their thanks for this initiative and highlighted how their companies rooted in the past look to the future with interest and hope, particularly with the aim of strengthening our territory and the products of new generations associated with it.

The event concluded with the companies handing out certificates of participation to the students. 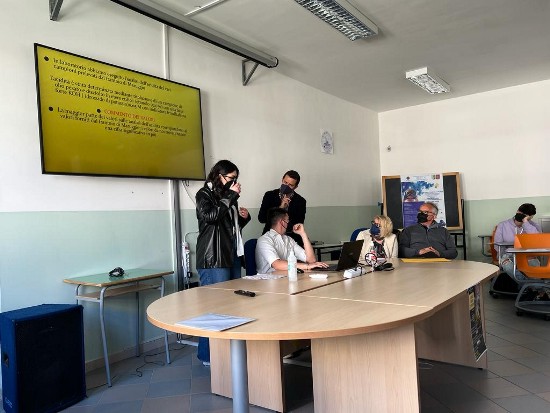